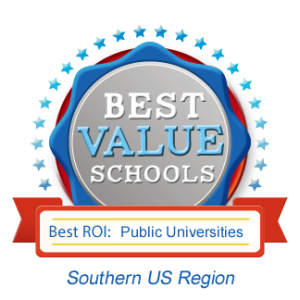 The Southern region of the United States boasts some of the oldest public universities and strongest academic traditions in the United States, and deciding which school is "best" can be a daunting task. When conducting research about college, many perspective students look to information outside of the basic cost of attendance. To that end, we've compiled a list of the top ranked public universities in each of the 13 states in the southern region, as reported by U.S. News and World Report. The schools on our list are ranked according to their 30 year net return on investment for in-state students.

We found the top public university in each state according U.S. News and World Report, grouped all those #1s by region of the U.S., and ranked them within those regions according to their net 30 year return on investment (ROI), as measured by PayScale. So, for example, the number #1 university in this list, Georgia Institute of Technology, has the highest net 30 year ROI of all the #1 ranked institutions in the Southern region of the United States. This enables a student interested in attending college in the Southern part of the U.S. to get a good sense of the top rated institutions with the highest potential return on investment.

For an in-depth description of the methodology used to develop this list, please see this link.

Founded as an agricultural and mechanical college in 1865, the University of Kentucky is the flagship school of the Kentucky State University System. The school features over 90 undergraduate programs and fifteen libraries on campus. The university set a goal in the late 1990s to become a top 20 research university by its own estimation by the year 2020.

Established in 1794, the University of Tennessee is one of the oldest secular institutions in the United States. The school holds papers from all three presidents who have hailed from Tennessee: Andrew Jackson, James K. Polk, and and Andrew Johnson. The school has a rich academic history that it carries through to this day. The school has over 28,000 students enrolled, hailing from all 50 states and more than 100 countries.

This school is not only highly ranked among public schools, but has been specifically recognized for its high level engineering and veterinary medicine programs, the latter of which is ranked #24 in the nation. The school has been recognized as one of the nation's best buys by Forbes Magazine and Kiplinger.

The University of North Carolina Chapel Hill was one of the first eight schools regarded as public ivy schools, offering an ivy league experience at an affordable public education price. The school is, and has throughout its long 224 year history, been considered one of the best public schools in the nation.

This public research university is located just across the PA state border near Pittsburgh. The school has been well regarded throughout its rich academic history spanning over 150 years. WVU has produced many Rhodes, Truman, and Goldwater scholars throughout its history.

The University of Alabama is a cutting edge research university. Two of their physics faculty were part of the recent international initiative that led to the discovery of the Higgs-Boson particle. The focus of the university isn't wholly on research, however. The school also focuses on excellence in teaching, and is dedicated to service in the local community and beyond.

The University of Arkansas is classified by the Carnegie Foundation as a research university with a very high level of research activity. The school is especially well known for its strong programs in agriculture, architecture, business, law, and middle eastern studies. In addition to being recognized as one of the top national universities in the country, UA is also considered one of the best values among top public universities, having been listed in the top 50 by U.S. News.

LSU features numerous cutting edge research facilities, over 24,000 undergraduate students, and 14 schools and colleges. The school operates over 800 research projects funded by a great number of the most prestigious and powerful research organizations in the country.

Clemson has been a powerhouse in public higher education since its founding more than 120 years ago. The costs of both in and out of state tuition at this South Carolina school are very low compared to many other top schools, and the quality of education offered at Clemson is competitive. The school has five colleges that house over sixty majors.

The University of Virginia is ranked second only to Berkeley among top public universities in the United States. The school is one of the original eight public ivies and is considered to provide the highest level education available among top public or private schools.

#2. University of Texas at Austin

The Georgia Institute of Technology is a public MIT. The school boasts the highest 30yr net ROI of any public school in the United States and that is because its programs are focused on being on the forefront of science, engineering, and technology, which are among the highest paying fields on average. The school is also an innovator in education and has begun offering online programs, with a new graduate program in computer science being offered for a fraction of the cost of a traditional program.

Take the next step towards your future with online learning.

Discover schools with the programs and courses you’re interested in, and start learning today.