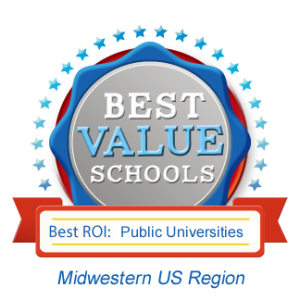 To help empower students to make better informed decisions when choosing a school, we have compiled the following list of the top ranked universities in each of the individual midwestern states, according to U.S. News and World Report's ranking of the country's top public schools.

We took the top public university in each state according U.S. News and World Report, grouped all those #1s by region of the U.S., and ranked them within those regions according to their 30 year return on investment (ROI) as measured by PayScale. So, for example, the number #1 university in this list, University of Illinois-Urbana Champaign, has the highest ROI of all the #1 ranked institutions in the Midwestern region. This enables a student interested in attending school in the Midwestern part of the U.S. to get a good sense of the top rated institutions with the highest potential return on investment.

The University of South Dakota is home to the state's only medical school and law school. The school was founded in 1862 while South Dakota was still a territory, 37 years before it received statehood. The school has just over 7,600 undergraduate students, and prides itself on providing residents of the state very affordable tuition and great educational opportunities.

Purdue University is well known and one of the most highly regarded public universities in the country. The school is the flagship university of the state university system of Indiana. The main campus offers more than 200 undergraduate majors, more than 800 student organizations, and 18 intercollegiate sports teams.

The English translation of the University of Nebraska's motto is "Dedicated to the letters and all arts." The school is one of the most respected research universities in the country, and boasts one of the best college football teams in addition to great academics.

The University of North Dakota is one of the first major public research universities to offer extensive undergraduate programs online. One thing that should be noted about these programs is that online students are charged in state prices regardless of whether or not they live in state. The school has a great reputation, strong academics, is innovative in the field of online education, and is extremely affordable.

Ohio State University is one of the foremost public research universities in the country. With over 46,000 undergraduate students on the Columbus campus, Ohio State is one of the largest universities of this kind in the United States. Despite the massive size, the school has over 7,000 academic staff, providing a strong student to faculty ratio.

The University of Missouri is one of only 34 public universities in the United States to be a member of the Association of American Universities, which is an international organization that seeks to unite the top research universities in the world with the goal of maintaining a strong culture of academic research education.

The University of Oklahoma offers over 150 undergraduate programs, and is classified by the Carnegie Foundation as a research university with "very high research activity." The school is large, with over 20,000 undergraduate students, and is ranked first per capita for the number of enrolled national merit scholars.

The University of Wisconsin is rated by the Carnegie Foundation as a research university with a very high research activity, and was one of the founding members of the Association of American Universities. The school has been labeled as one of the "public ivies," signifying that it provides the highest level of education, coupled with the affordability of a public education.

This public research university has produced some of the greatest minds in recent history. Eight Nobel Laureates, two Pulitzer Prize winners, and two Vice Presidents of the United States are among the school's notable alumni-all of this from an accessible public school with the sixth highest main campus population in the United States.

The school, commonly referred to as just "Michigan," is the oldest university in the state, established in 1817. Michigan was a founding member of the Association of American Universities and is a leading public research institution. The school boasts over 27,000 undergraduate students, over 12,000 postgraduate students, and 27 varsity athletic teams.

Another public research university with membership in the Association of American Universities and a "very high" research classification from the Carnegie Foundation is the University of Illinois-Urbana Champaign. The school boasts one of the highest in and out of state return on investment in the midwestern region. Indeed, the 30 year net ROI for out of state students is still higher than any other midwestern school on this list.

Take the next step towards your future with online learning.

Discover schools with the programs and courses you’re interested in, and start learning today.